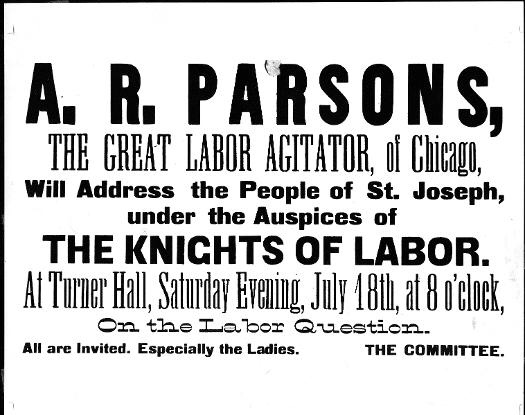 In Texas, a former Confederate soldier named Albert Parsons emerged as a radical supporter of the Reconstruction acts in his newspaper the Spectator. He was “regarded as a political heretic and traitor” and “incurred thereby the hate and contumely of many of my former army comrades, neighbors, and the Ku Klux Klan.” Parsons left Texas for Chicago, where he became enraged by the graft and corruption that accompanied “relief” efforts in the wake of the great Chicago fire of 1871. The complaints of the city’s working-class, Parsons found, were “just and proper.” Moreover, he “discovered a great similarity between the abuse heaped upon these poor people by the organs of the rich and the actions of the late southern slave-holders in Texas toward the newly enfranchised slaves . . . and it satisfied me there was a great fundamental wrong at work in society and in existing social and industrial arrangements.”