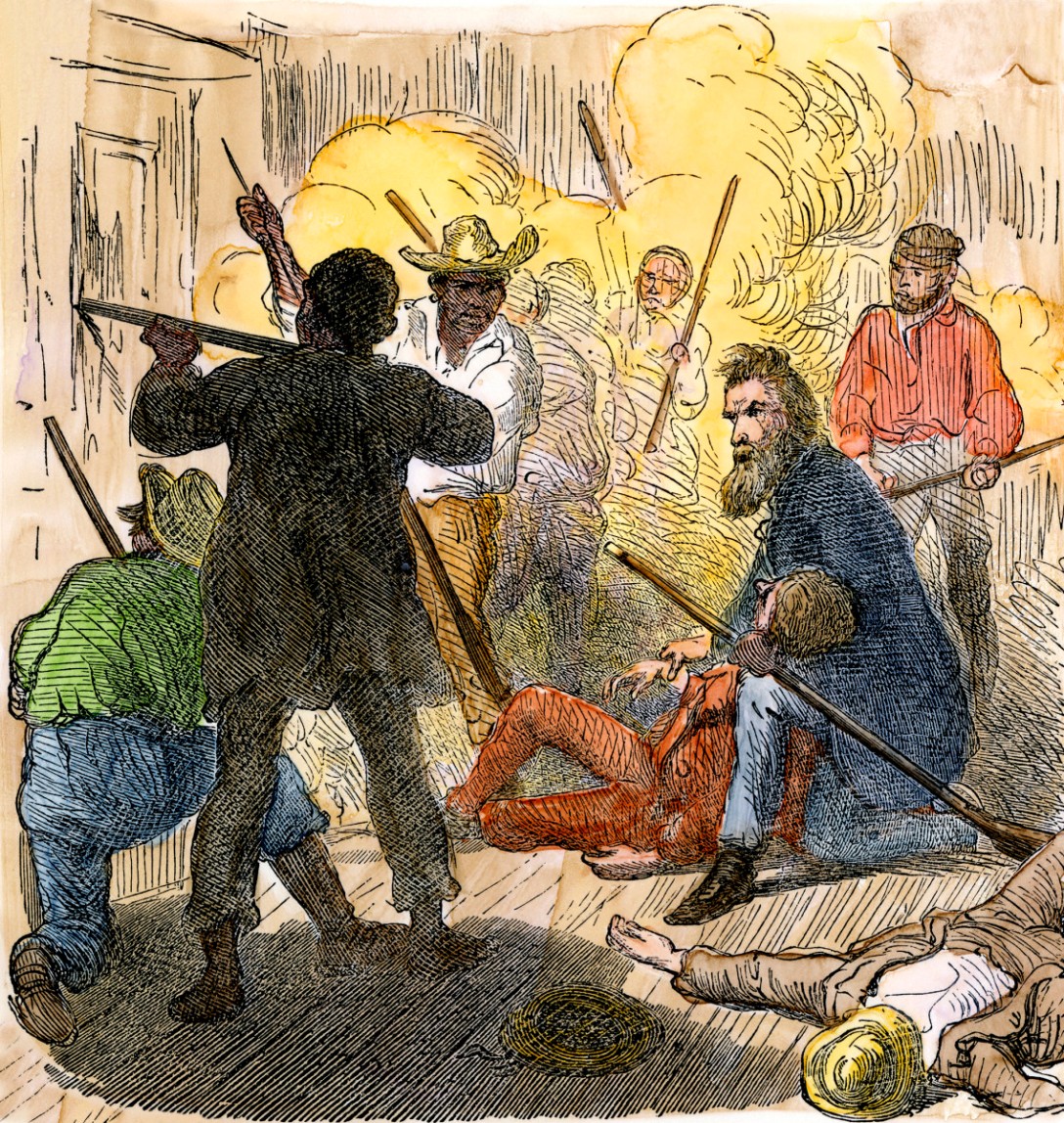 This is a short excerpt from the chapter “Civil War, Reconstruction, and Colonialism”
in White Bred: White Trash, Rednecks, and Hillbillies Against White Supremacy

Convinced of impending slave-revolts, stirred by incendiary white abolitionists, slaveowners saw all their nightmares confirmed in a daring interracial insurrection during the fall of 1859. The raid on Harper’s Ferry heralded their hell on Earth; Blacks and whites, united in armed insurrection against slavery. Although the raid drew on the wealth of experiences from its conspirators, John Brown remains the central figure of the insurrection. In a speech several years after the raid, Frederick Douglass lionized the martyred Brown;

The bloody harvest of Harper’s Ferry was ripened by the heat and moisture of merciless bondage of more than two hundred years. That startling cry of alarm on the banks of the Potomac was but the answering back of the avenging angel to the midnight invasions of Christian slave-traders on the sleeping hamlets of Africa.

. . . His zeal in the cause of my race was far greater than mine – it was as the burning sun to my taper light – mine was bounded by time, his stretched away to the boundless shores of eternity. I could live for the slave, but he could die for him.⁠24

But John Brown didn’t launch—or plan—the insurrection alone. In a Maryland log cabin not far from Harper’s Ferry, Black and white revolutionaries debated and voted on their strategy. Osborne Perry Anderson, the only Black participant to survive the raid, described the gathered revolutionaries:

Some of them were outlaws against Buchanan Democratic rule in the Territories; some were colored men who had felt severely the proscriptive spirit of American caste; others were escaped slaves, who had left dear kindred behind, writhing in the bloody grasp of the vile man-stealer, never, never to be released until some practical, daring, determined step should be taken by their friends or their escaped brethren. . . . In the light of slaveholding logic and its conclusions, they were but renegade whites and insolent blacks; but, aggregating their grievances, summing up their deep-seated hostility to a system to which every precept of morality, every tie of relationship, is a perpetual protest, the men in Convention, and the many who could not conveniently attend at the time, were not a handful to be despised.⁠25

Although dismissed by the media at the time as religious fanatics, the revolutionaries shared in their utter hostility to the institutions of slavery. Their righteous cause demanded blood. The revolutionary collective drew on vast experience in the struggle against slavery and included important military experience. In their Provisional Constitution and Ordinances for the People of the United States the assembled revolutionaries voted to boldly declare:

Whereas slavery, throughout its entire existence in the United States, is none other than a most barbarous, unprovoked, and unjustifiable war of one portion of its citizens upon another portion-the only conditions of which are perpetual imprisonment and hopeless servitude or absolute extermination-in utter disregard and violation of those eternal and self-evident truths set forth in our Declaration of Independence.

Therefore, we, citizens of the United States, and the oppressed people who, by a recent decision of the Supreme’ Court, are declared to have no rights which the white man is bound to respect, together with all other people degraded by the laws thereof, do, for the time being, ordain and establish for ourselves the following Provisional Constitu­tion and Ordinances, the better to protect our persons, property, lives, and liberties, and to govern our actions.⁠26

Although the raid on Harper’s Ferry failed to immediately spark a wider insurrection against slavery, it was the opening salvo to the firestorm of civil war. The legacy of John Brown and his insurrection inspired the anthem of Union soldiers, John Brown’s Body, which promised to hang Confederate President Jefferson Davis from a tree.

The bodies of Shields Green and John Copeland, two of the Black rebels captured and hanged were sent to Winchester Medical College in Virginia for dissection by medical students. The body of John Brown’s son Watson was sent as well, where it was displayed as a model skeleton at anatomical exhibitions. In 1862, the college was burned to the ground by Union troops⁠27, allegedly in retaliation for Brown’s treatment.